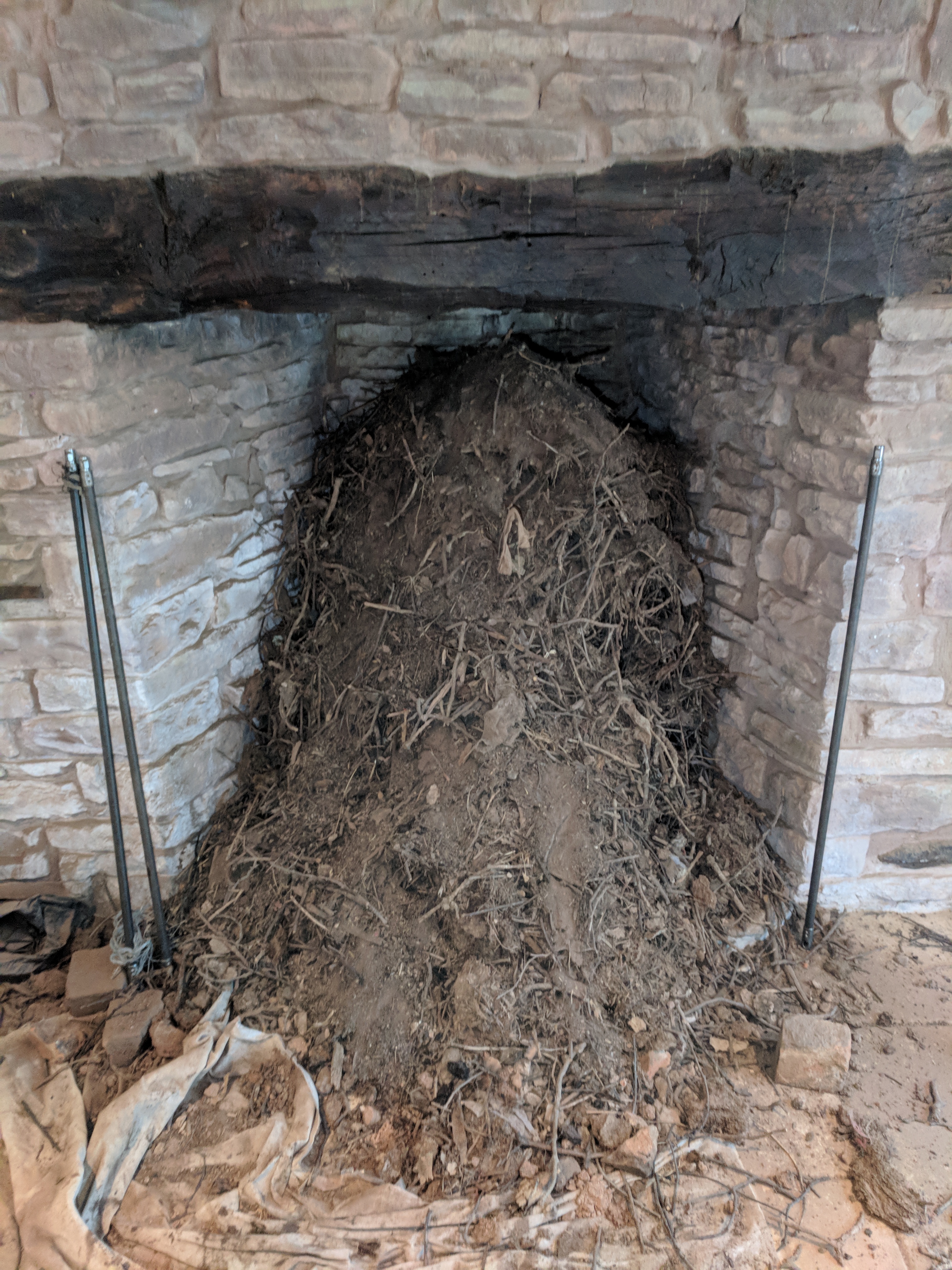 A warning for new homeowners!

These pics were taken by me Alec Osborn, in the Hereford area, after I was called-in to inspect a chimney. The new home owners had decided the chimney structure and woodburning stove needed a careful inspection. It was a good job they did – the situation was dangerous!

“The photos show a jackdaw nest I removed. There were 14 wheelbarrows worth of material to discard!

“This had a live, unlined Woodburner in it but thankfully the new homeowners called me in to check it out.”

The hole you can see in the nest is where the flue pipe from the stove poked up into the old chimney. These photos show just how important it is to have your chimney inspected when you move into a new home. The jackdaws’ nest was an extremely dangerous fire hazard, and the unlined chimney presented an additional risk. Luckily, the owners employed commonsense and contacted Alec just in time.

“We’re grateful to Alec for sharing these photos with the wider public,”

“It’s a perfect illustration as to the importance of professional chimney inspections and sweeping.

“We dread to think what may have happened if Alec had not been called to the scene. Fortunately, these new homeowners did the right thing and now they can enjoy the Woodburner safe in the knowledge that the chimney has been given a risk assessment and proper sweep by Alec.” Steven added: “If you have just moved into a new home, please do not be tempted to light the fire.

Contact your local Guild sweep straight away and ask for a professional review of your chimney. You can easily find them via the Find a Sweep directory.”

This site uses cookies. By continuing to browse the site, you are agreeing to our use of cookies.

We may request cookies to be set on your device. We use cookies to let us know when you visit our websites, how you interact with us, to enrich your user experience, and to customize your relationship with our website.

Click on the different category headings to find out more. You can also change some of your preferences. Note that blocking some types of cookies may impact your experience on our websites and the services we are able to offer.

These cookies are strictly necessary to provide you with services available through our website and to use some of its features.

Because these cookies are strictly necessary to deliver the website, refuseing them will have impact how our site functions. You always can block or delete cookies by changing your browser settings and force blocking all cookies on this website. But this will always prompt you to accept/refuse cookies when revisiting our site.

We fully respect if you want to refuse cookies but to avoid asking you again and again kindly allow us to store a cookie for that. You are free to opt out any time or opt in for other cookies to get a better experience. If you refuse cookies we will remove all set cookies in our domain.

We provide you with a list of stored cookies on your computer in our domain so you can check what we stored. Due to security reasons we are not able to show or modify cookies from other domains. You can check these in your browser security settings.

We also use different external services like Google Webfonts, Google Maps, and external Video providers. Since these providers may collect personal data like your IP address we allow you to block them here. Please be aware that this might heavily reduce the functionality and appearance of our site. Changes will take effect once you reload the page.